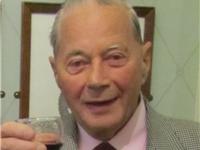 Douglas Grocott was born on 8 February 1923 and entered the Royal Air Force in 1942, training as a navigator and ferrying aircraft across the Atlantic to Europe and Africa.

Following post-graduate training at the Empire Air Navigation School in 1945, 'Pinky' - as he became known due to his young rosy cheeks - became nav leader on a VIP transport squadron, being awarded the Air Force Cross.
He took No 2 Spec N Conversion Course - which became the 'Spec N' and later the 'Aerosystems' Course - becoming involved with the Aries polar flights and entering the world of Operational Requirements and R&D, including an appointment as Chief Experimental Navigation Officer at Boscombe Down.After directing the Spec N Course and a succession of senior appointments, Air Commodore D F H Grocott CBE AFC retired from the RAF in 1977.He then became Director Europe of the US company Singer Kearfott, seeing its transition to GEC-Marconi Electronics Systems Corporation. He retired in 1990.Pinky joined the Institute in 1949, becoming a Fellow in 1954, and served on the Technical Ctee and Council a handful of times. He was a VP in 1970, Chairman of the Technical Ctee from 1987, Chairman of the 2nd Way-ahead Group and President in 1996-99.Pinky is unsurpassed in contribution to the Institute's Animal Navigation Group, having generated from scratch, with the help of researchers, a worldwide facility including over 12,000 references and almost 10,000 research papers available to a very active group and forum. He has also been a major architect of the the RIN series of Animal Navigation conferences, including the upcoming RIN 13.Whilst hoping to hand over much of his work to others after RIN 13, we know that Pinky will continue to make a significant contribution to our activities. We wish him a very Happy Birthday, with many more to come . .